The Department of State Services (DSS) has reportedly collated audio and video recordings to be used against Yoruba Nation agitator, Chief Sunday Adeyemi, popularly called Sunday Igboho in the event of a trial in Nigeria.

It is a similar strategy applied by the DSS in the case of the Supreme Leader of Indigenous People of Biafra, IPOB, Mazi Nnamdi Kanu.

According to DAILY POST, a source said that Igboho’s audio and video interviews, as well as comments in clips on the internet have been collated.

“This is what they have been doing to Kanu. The DSS investigators played different recordings and asked him to confirm if he uttered those things or not.

“The evidences already gathered against Igboho will similarly be played and his responses noted. If a trial happens, they will play the tapes in court,” the source said.

WITHIN NIGERIA had earlier reported that Nigeria’s attempt to extradite Igboho to the DSS Headquarters in Abuja was rejected by the Beninese government, who insisted that rule of law must be followed.

Recall that the 48-year-old separatist had openly boasted that he could help to procure guns and that anybody caught with one should tell the authorities he made the provision.

In a viral video, Igboho encouraged communities to buy arms and ammunition for their youths.

“Those who don’t have guns, contribute money and buy guns for them. You can record me. If they don’t know where to buy gun, I will help them to buy it.

“No government can say people should not carry weapons now. If they (youths) are caught, they should tell them that I, Igboho, provided the guns. The guns are to protect ourselves, we will fortify them with charms”, he added.

Under the law, threatening the state with war, which Kanu, leader of the Indigenous People of Biafra (IPOB), and Igboho repeatedly did, are treason.

Section 37(1) (a) of the Criminal Code Act, Laws of the Federation of Nigeria 1990, states to wit: “Any person who levies war against the state, in order to intimidate the president or the governor of a state is guilty of treason and is liable to the punishment of death.”

Kanu and Igboho threatened to raise an army to fight the government. In one of his broadcasts, Kanu said he could order a hit on South-East governors.

Igboho often lambasted some South-West governors and leaders of working against the actualization of Yoruba Nation.

Although criticisms are protected in the constitution under freedom of speech, Igboho is in trouble for pronouncements, including forceful break up of Nigeria. 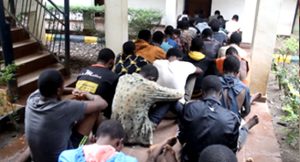